June 4, 2020, Prenups 2021: How Will The Partnership Be Defined?, New York Association of Collaborative Professionals, available to members and non-members.

May 8, 2020, Webinar: What We Have Learned: Mediating During the Covid Pandemic, New York State Council for Divorce Mediation.

October 2014, Fear, Revenge and Anger: The Delicate Balance of Mediating Prenups and Postnups: An Intersection of Psychology & Law, Academy of Professional Family Mediators.

March 2011, Collaborative Practice: The What and the How, New Rochelle Bar Association

October, 2011, Key Moments in a Collaborative Case: First Contacts with the Client and the Team, Office of Court Administration, New York, New York

November 2009, Domestic Violence and the Collaborative Practitioner: The Complexity of Power in Relationships, Pace University School of Law, White Plains, New York, Co-Sponsored by the New York Association of Collaborative Professionals and Pace Women's Justice Center: program included how to screen for domestic violence and ethical considerations of the collaborative practitioner. This program was one of the first of its kind in New York.

Fall 2009, Get In Or Get Out: Protecting Yourself in Relationships, The Loft, White Plains, New York. 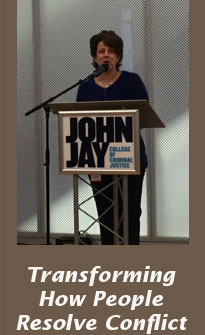